Watched the Newshour debate on TimesNow last night, and chose to retain the title “New Indian Taliban” for its appropriateness.

In 21st century India, a Khap Panchayat has issued a bizarre diktat banning girls from wearing jeans and carrying mobile phones claiming it leads to sexual harassment. And leaders of the party that rode the development wave and rose to power choose to turn a blind eye to this medieval diktat. What an irony!

It was really shocking to hear self-professed custodians of morals and culture going into specifics of female attire to convey their archaic thoughts like ‘jeans send out the wrong message’ and ‘ban is meant for safety of women.’ And it does not end here – they go on to elaborating that women must not wear colourful clothes and use a cellphone … it will lead to rapes. How absurd and ridiculous!

Can someone please explain as to what attire is right and what is wrong? How can it be justified? Rapes and molestation are brutal acts, and the moral police seem to be forgetting that burkha-clad women, old women and even little girls have been subject to such atrocities. How will the ban on jeans and cellphones help?

The current Chief Minister of Haryana, Manohar Lal Khattar has openly backed Khaps in the past. It is a known fact that Khattar is conservative on issues like women’s rights, and this was demonstrated during his election campaign, when he had blamed women for India’s rising number of rapes. “If a girl is dressed decently, a boy will not look at her in the wrong way,” Khattar had said. When asked whether young people should have freedom of choice, he had replied, “If you want freedom, why don’t they just roam around naked?” And now he chooses to remain quiet and not comment on the diktat. Ironically, his Agriculture Minister calls Khaps an organization in favour of modernization. The term ‘modernization’ is clearly misunderstood.

We should pause and reflect on questions like – Who decides what is right and what is wrong? How can an organisation dictate terms of social conduct for one gender, while ignoring, or possibly, even encouraging unruly, uncouth, lewd behaviour from the other? The Fundamental Rights in our Constitution mentions Right to Equality – equality in the eyes of law, discarding any unfairness on grounds of caste, race, religion, place of birth and GENDER.

India has performed poorly in removing gender-based disparities, ranking 114 out of 142 countries in World Economic Forum’s 2014 gender gap index, scoring below average on parameters like economic participation, educational attainment and health and survival. India being part of the 20 worst-performing countries on critical parameters, is indicative of the fact that we have a long way to go so as to bring about gender equality.

We heard a lot of promises and claims on women’s issues, rights and empowerment during the election campaigns. The language is clearly changing post-elections.

If the so-called leaders of our country continue with this regressive and medieval thinking, I shudder to think what could come next? One can continue to debate on ‘right and wrong attire for women’ and for that matter, even men. But the bigger task on hand is to change mindsets. When a woman is raped or molested, rather than empathizing with her state of mind, the question on minds of these regressive mindsets seems to be “what was she wearing?”, ”Did she have a cellphone?”. How else could attire and gadgets even get linked to brutal crimes? There needs to be big paradigm shift in the mindset. The tendency to think that a woman ‘invites trouble’ is where the change needs to happen. There is a BIG need to sensitize village panchayats, local leaders and the society at large to women issues. Can these self proclaimed custodians of ‘morality’ start with themselves? When they see a girl being harassed, can they stop the perpetrator, instead of giving the girl philosophical talks on ‘decorum?’ Can they start respecting the fact that decorum applies to the male as much as the female? Can they train themselves and their sons to not just look at the female body as an ‘object of sex’? Can they train boys not to subject girls of their age to lewd stares, jeans or no jeans? Once this message starts at all ages, boys will grow up understanding respect. And our country will be a safer and better place to live in. 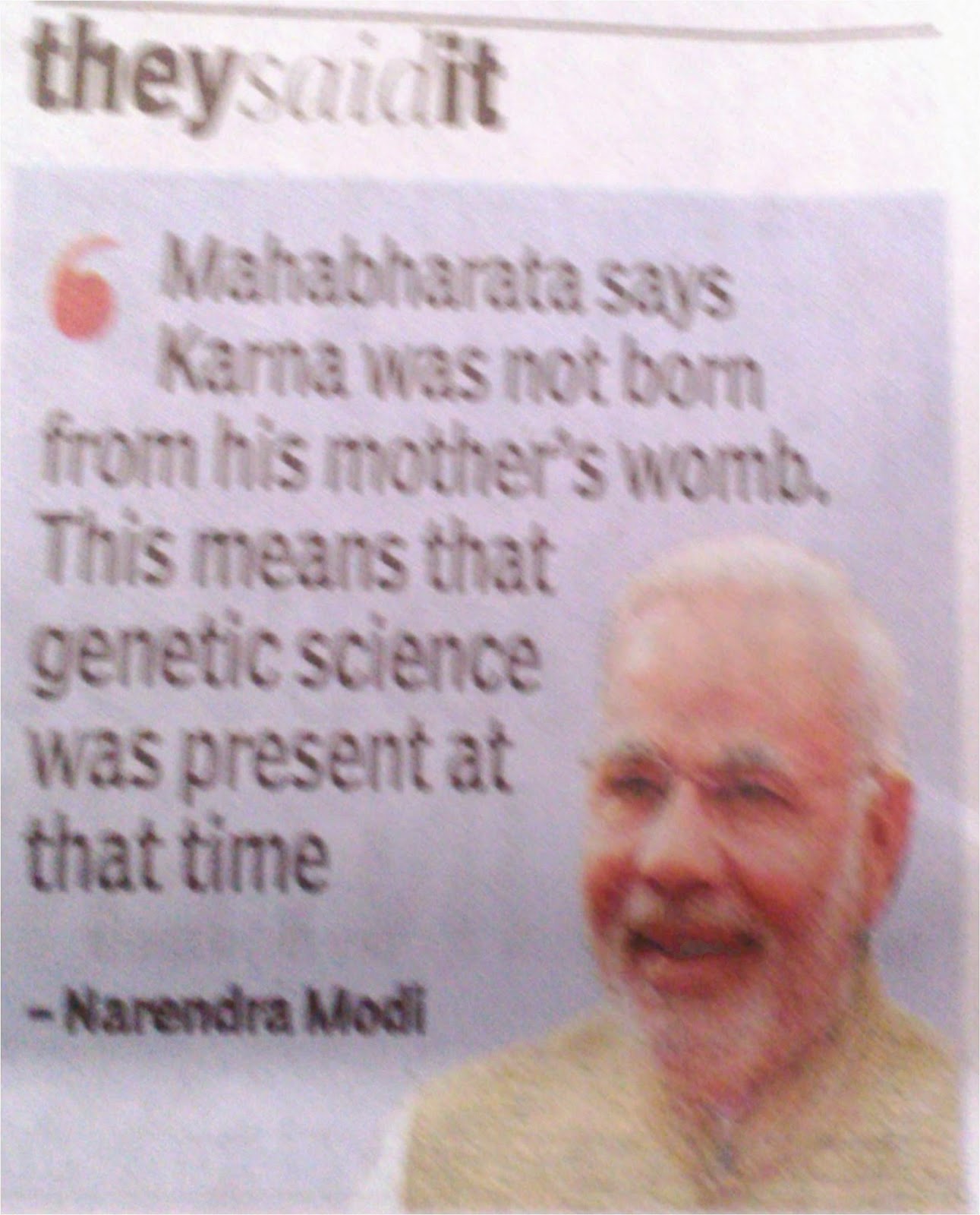 Speaking at a function in Mumbai on Saturday, Mr. Modi stressed on the need to improve healthcare facilities and said “We can feel proud of what our country achieved in medical science at one point of time. We all read about Karna in Mahabharat. Karna was not born from his mother’s womb. This means that genetic science was present at that time. That is why Karna could be born outside his mother’s womb.” He spoke of Lord Ganesha and said that there must have been some plastic surgeon at that time who got an elephant’s head on the body of a human being and began the practice of plastic surgery.

Why just medical science? Mr. Modi seems to be forgetting our contribution to Space Science, Aeronautics, Engineering, Quantum Mechanics and Technology! Missiles were used in Mahabharata, right? And where did these ancient highly powerful and advanced futuristic weapons come from? But obviously from aliens! Ancient Indians had already discovered other planets and launched ‘satellites’ centuries ago. Am sure there are lessons for modern day scientists. Probably organisations like ISRO and NASA should simply study Mahabharata, Ramayana and other mythological tales, rather than spending time and energy on modern research and development. Just imagine how advanced the technology those days were that Rama’s bridge, the Sethu between India and Srilanka was built in less than one year. And then how can we forget that Sita’s whereabouts were probably successfully located by use of GPS. Ancient India’s development in aeronautical engineering was also so advanced that Sant Tukaram was carried to Vaikunta (heaven) by Lord Vishnu’s Garuda Vahan, the most sophisticated drone during those times.
At not point in time, do I mean to criticise Indian mythology – I myself am well-read and believe in the richness of our Indian culture and benefits of reading these legends. My objection is to glorification of mythological legends to establish relevance in the modern era.
Our first Prime Minister, Pundit Jawaharlal Nehru, way back in 1930’s believed that Science and Technology would play a major role in the economic, social and cultural advancement of our country. He envisioned the development of nuclear weapons and established the Atomic Energy Commission in 1948. Isn’t it an irony that here we are today in 2014, and our Prime Minister, Mr. Narendra Modi, creates stories to glorify relevance of ancient mythology? Am surprised, to say the least. Seriously hoping he does not really believe this. Are we moving backward or forward???